Safety around heaters – some considerations for care homes

Is safety around heaters really so very important for care homes with the second wave of the pandemic well on its way? In these troubled times, it would be easy for care homes to focus on health and safety considerations relating to the pandemic – hygiene, visitor management, social distancing and so on.

In recent months staff and management in our nation’s care homes have redoubled their efforts to keep residents safe. However, with winter round the corner, the last thing needed is an extra visit to A&E because a resident has burned their hand on the hot surface of a heater. Thus, safety around heaters is more important than ever.

MS Guardio partners with AIANO, the oldest and leading provider of wire mesh guards, including heater guards on the market. AIANO has been working with care homes, residential homes, schools, nurseries, sheltered housing associations on their heater guard requirements for decades. AIANO also works closely with Dimplex, the world’s largest and foremost manufacturer of electric heating equipment. We invited AIANO to share some ideas and thoughts about safety around heaters in care homes.

The risks of heaters with high surface temperatures

Elderly residents in care homes can be at risk of burns or other injuries because of contact with heating equipment. The Health & Safety Executive has pointed out that those at risk include residents with reduced mental capacity or with impaired sensitivity to temperature. However, all residents are potentially at risk. In the case of burns, the surface temperature of the heater is important, but so too is the length of time for which contact with the hot surface is sustained. As we age our reactions slow, and this will affect the seriousness of the injury sustained.

If an elderly resident has a fall resulting in close contact with a heater, and he or she cannot get up without assistance, the very heater that should be helping to make life comfortable and cosy may become a serious hazard.

Aiano has carried out surface temperature testing on both Dimplex heaters and Aiano heater guards. The results and understanding gained is used in our development of new heater guard designs.

Aiano wire mesh radiator covers are the result of decades of experience, and a constant effort to keep our manufacturing process at the forefront of innovation. We cooperate with Dimplex, the leading manufacturer of electrical heating equipment in the world. We have developed a range of guard designs and features to address a wide variety of requirements, environments, and budgets. 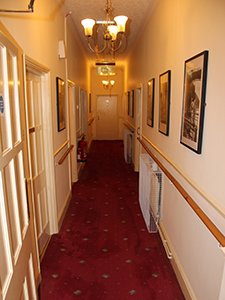 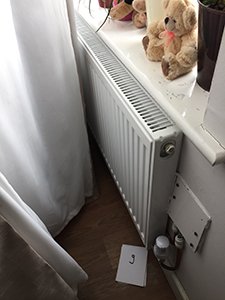 Radiator guards sometimes have to be designed for awkward nooks and crannies such as under a window sill. 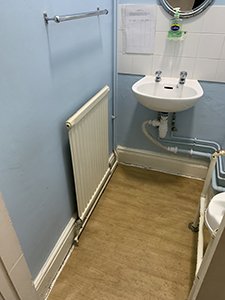 In a small washroom the heater must be made without hindering access to the washbasin.

Safety around heaters in awkward or confined spaces

Care home managers and owners have a tough job to select the optimum heating solution for their premises in a way that best reconciles considerations of comfort, economy, safety, together with the specific requirements of residents and constraints of the building. On top of this they have to consider how best to provide safety around heaters.

To take a simple example, putting a wire mesh safety guard on a radiator seems like an obvious safety precaution. But if doing this makes the corridor narrower and impairs walking frame or wheelchair access, the safety measure may then become a potential safety hazard.

Many care homes are based in premises that were not designed for this purpose. They may have narrow corridors and legacy heating systems that are not easy to change. Aiano has been privileged to manufacture and install wire mesh heater guards in a large number of care homes over the years and has worked with all kinds of heaters, including storage heaters, panel heaters, low surface temperature heaters and free-standing heaters, such as oil filled radiators. We are sympathetic to the constraints of budget and environment. It is critical to provide the right design of guard for the right situation for every care home is different.

When it comes to safety around heaters, it is often necessary to reconcile conflicting demands, as discussed above. None the less, over the years AIANO has developed a variety of core wire mesh heater guard designs to suit many environments and budgets. In addition to this our engineers tailor our guards to fit the specific features of the environment for the optimum solution.
The core benefits of wire mesh safety guards are:

•  It provides a physical barrier between the resident and the heater helping to prevent the possibility of burns.

•  The wire mesh construction allows for optimum heat circulation – the energy efficiency of the heater is not compromised.

There are several rules of thumb to ensure that your wire mesh heater guards function in a safe and optimal way:

•  There should always be a clearly visible notice reminding residents to take care and not to put items on top of radiators and/or guards.

•  The heater guard should never be used as a shelf. Objects such as books, coats, coffee cups and so on should NEVER be placed on top of the guard (see AIANO sloping top radiator guards that are designed with this safety risk in mind).

•  The heater should be operated in accordance with manufacturer’s recommendations. It is better to operate the heater on moderate temperature settings than to be operating it on maximum heat output.

How much clearance should a heater guard have?

The open wire mesh construction is great at allowing for optimum heat circulation from the heater, but because the guard to is made from metal, if it is too close to the heater there is a risk of the guard becoming over hot.

In addition, the guard should be finger-safe. By this we mean that if fingers are passed through the mesh, they should not be able to touch the heater.

At Aiano, the clearance we use varies from heater to heater. Heaters that operate at a very high temperature output, such as quartz heater, require greater clearance. None the less for most types of heaters we use clearance of 75-100mm on every side. For a low surface temperature guard the clearance may be as much as 150mm.

In some locations within care homes, such as washrooms or corridors, as described above, it may not be feasible to observe the 75-100mm clearance. This is one of those difficult decisions that care homes managers need to make choosing between conflicting safety demands. If the clearance needs to be reduced to, for example, 50mm for reasons of lack of space, then the heating will need to be operated at a correspondingly lower temperature.

Aiano manufactures a wide range of radiator guard designs to help provide safety around heaters, and to meet every requirement and budget, and every design is available for both floor-standing storage heaters, central heating radiators, and wall-mounted panel heaters and electric radiators.

We will be publishing focus articles highlight the relative benefits of these different design in the coming weeks. 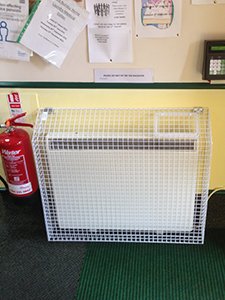 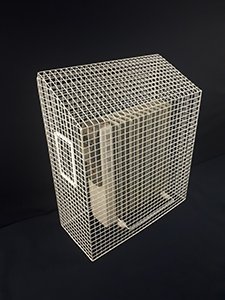 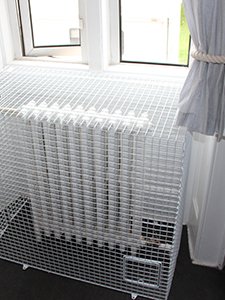 At MS Guardio we pride ourselves in offering the widest range of wire mesh guard solutions for all your health & safety needs and much more.  Our products are practical, strong and beautifully crafted by Aiano from British and European steel.

Wire mesh guards are our world and we are experts on the wire mesh products we offer you. We keep a large stock of all the most popular wire guard products, which means we can get your order dispatched with speed and efficiency. We also provide guidance and helpful information on what to look for and how to choose your guard MS Guardio offers the widest range of radiator covers for all the most popular makes of heater.

But as well as heater guards, we sell protective guards for light fittings including fluorescent light guards, bulkhead guards and floodlight guards and various sensor guards. Please call us on 020 7987 1184 or email us if you would like to discuss your requirements, or for further information or advice on our products.